Hey guys! October is over 😥
I am sad because my favorite month came and went so quickly, but with it came some fun adventures and excitement! So as you could tell from my last post about our costumes, I love me some Halloween. The folklore as well as a jolly good spooky time….and this year we decided to throw a Halloween party!!

Now as much happiness that this decision brought me, it also brought some stress. Firstly because even though we do host friendly or family get-togethers every so often, we also have not had a party at our place since our house warming…3 1/2 years ago! I do enjoy hosting but we also live in a small-ish 1 bedroom apartment. Careful considerations have to go into not making the space too cramped, as well as making areas useful for guests.

I also have a bad habit of making myself a little crazy when I’m planning something. Kevin always says I bite off more than I can chew, although in my defense I can usually pull it off. It’s not that I want too, it’s just that I have too many creative ideas flying around in my head and I want to make them ALL happen, even if it involves me getting a little carried away.

So here’s a little post on how we decorated for our Halloween party.

**Disclaimer: I was having a blast and totally didn’t get enough photos of the party happenings or the themed food everyone contributed, YIKES!!! These photos were all taken post party at 2 a.m. 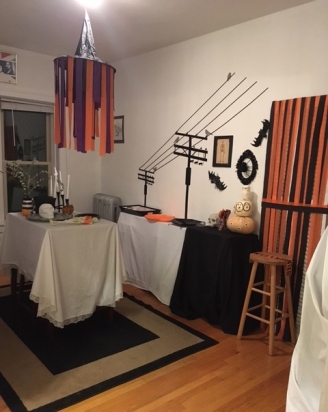 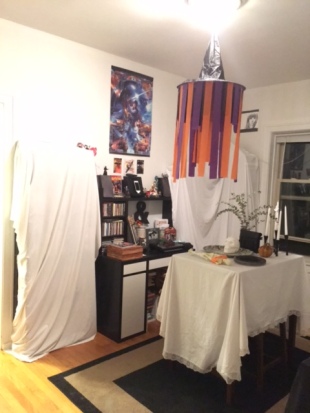 This was where all the food was laid out so I knew people were gonna meander in here. I kept it simple by covering most of the major pieces of furniture in white sheets from the thrift store, to give it that eerie abandoned house feel. You can see the bookcases and the table covered up in the second pic. The first pic has the table as well as my crafting cube storage unit (which I raised with concrete blocks and covered with a sheet to make a buffet!)  and our microwave stand (which I call our island, it’s usually in our kitchen) covered in black. 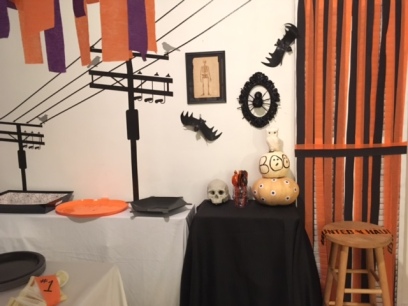 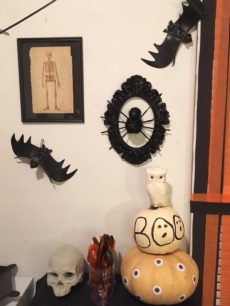 Our decorative shutters we covered in orange and black crepe streamers. More spooky details are the framed skeleton from a vintage book, and dollar store bats and a spider I set atop a dollar store frame. I also created the orange pumpkin with eyeball stickers and the white “BOO” pumpkin with a sharpie, stacked them with a dollar store mummy owl. The concrete skull is borrowed from work and the clear skull cup the silverware is in was a gift. 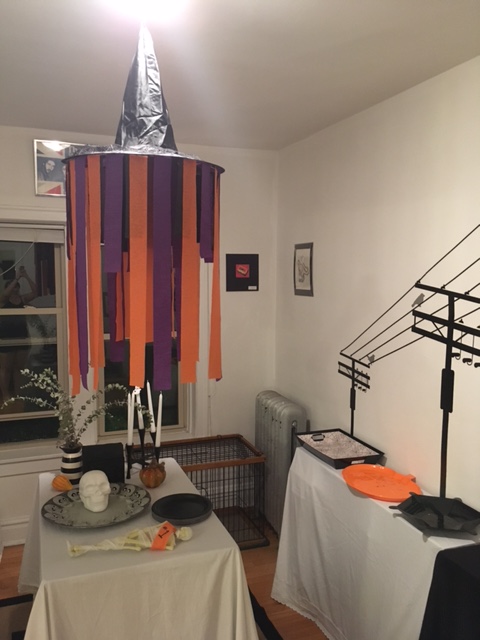 We made the Witch Hat Chandelier with a dollar store witch hat and crepe streamers in Orange, Black, and Purple. I taped ones in the inner brim and then taped the second ones right outside the inner brim, then stapled them to outer edge of the brim. By punching a small hole at the top of the hat, we were able to tie it to our light fixture with clear invisible thread to give it a floating look. The plastic Pumpkin/Spider Web serving platters on the “buffet” were $2 a piece at Target. On the table is a skull serving platter (borrowed from my mother-in-law), black paper plates, black napkins, black candlestick holder, plastic white skull, and black and white striped vase (with dried eucalyptus) all from Target. The glass pumpkin was a gift. 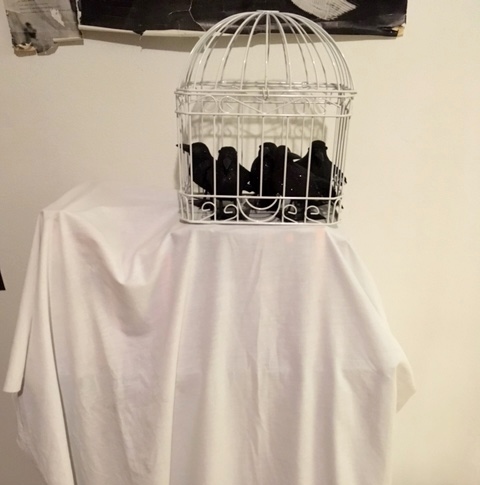 Opposite the dining table is another covered bookcase with a wire cage (from our wedding) filled with dollar store birds. 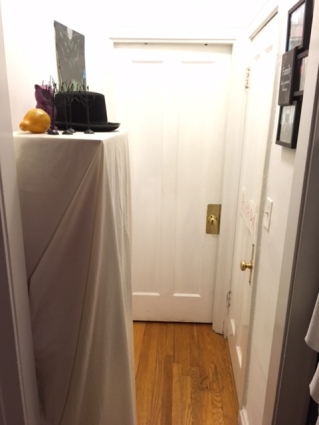 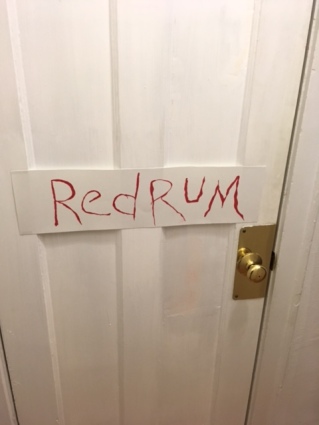 There is a small hallway off the dining room that leads to our bedroom and bathroom, I covered the bathroom extras shelving unit in another sheet with a gourd, and dollar store trees and hat set on top. The bathroom door had a REDRUM (from the Shining) sign I wrote with a red sharpie on white poster board.
*Spoiler: It spells MURDER backwards 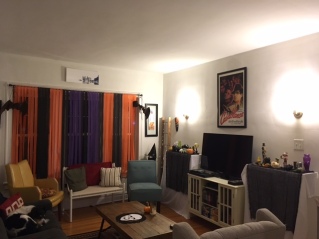 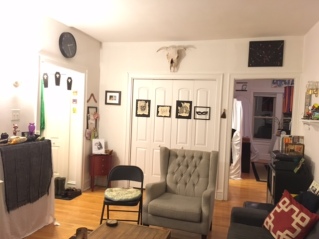 I knew the living room would be the gathering place after foods, so we set up ample seating in a loose semi circle but I kept obvious pathways clear so people could walk through. 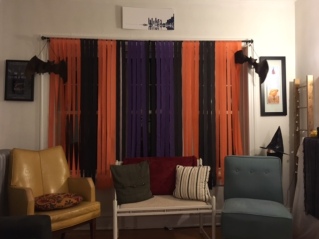 We have 3 large windows that take up a whole wall, since our party was in the evening we covered the length of the windows in the  Orange, Black, and Purple crepe streamers just taped to a curtain rod (left by previous tenants). On each side of the windows there are these awesomely freaky bats I borrowed. Opposite the window wall is our long living room closets which we made into a creepy gallery with skull, lung, and surgical tool print outs on cream paper. I burned the paper on the edges and made a mat/frame with black poster board. Also a spooky dollar store mask that I suspended in a dollar store frame with invisible thread. The little witch brush looking thing is from Trader Joe’s and smells of cinnamon, also hung with invisible thread. 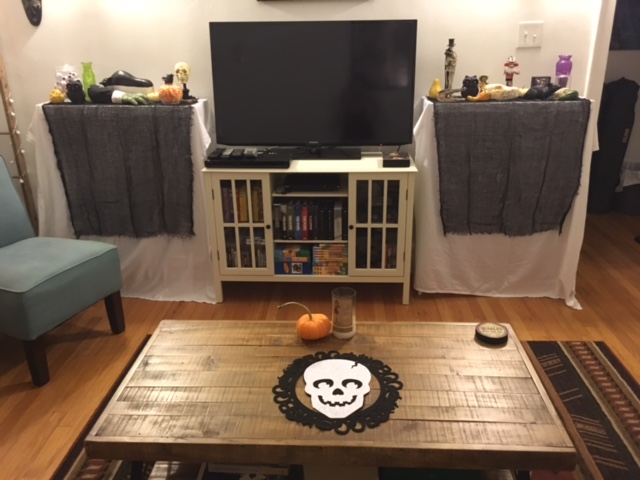 I was not gonna cover our beautiful new coffee table that I’m loving! We kept it simple with a fun pumpkin (check out that extra long stem), a dollar store placemat, and one of my homemade rum bottle candles. 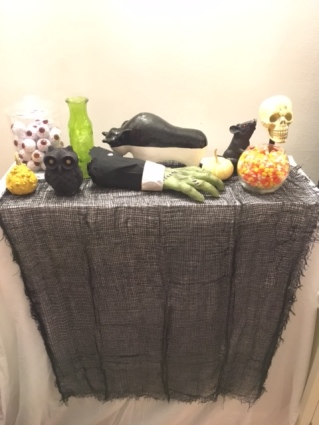 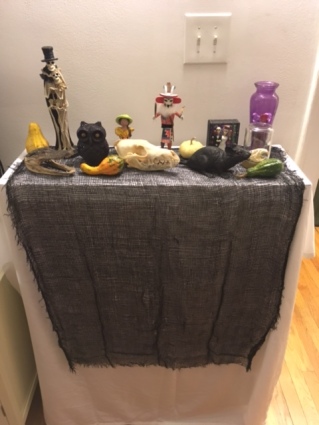 Our DVD shelving units were also covered with white thrift store sheets and to spice it up some black dollar store netting. We also put a ton of freaky dollar store finds mixed in with some of our regular decor. I made a jar of plastic eyeballs, green and purple vases filled with candy and clear plastic spiders, owls, rats, skulls, jar of candy corn, all from the dollar store. Mix in some fall gourds and a moving Frankenstein hand (borrowed), in addition to our skulls and travel pieces we’ve collected. Makes it look like some mad scientist lab collection! 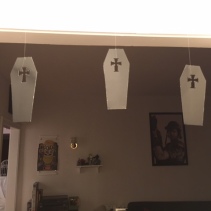 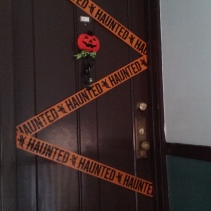 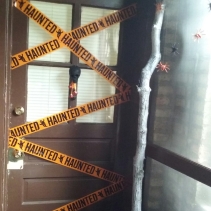 Added some coffin garland to our doorways and remember our front and back doors! Those doorknockers, haunted tape, and plastic spiders (invisible thread) all came from the dollar store. 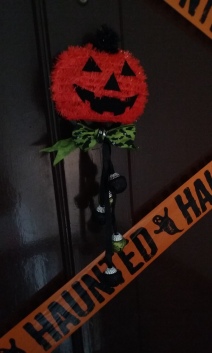 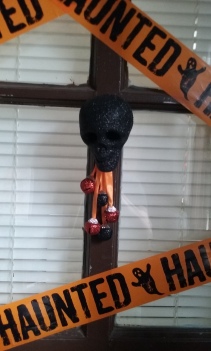 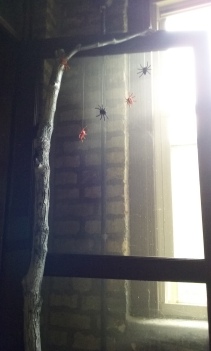 I was soooo happy with how everything turned out!
Scary Chic!

I tried to create a dead body in a garbage bag in our shower, with “blood” splatter everywhere. My idea was to use ketchup (since it will rinse off easy) and a garbage bag full of clothes for a dead body, seemed straight forward enough BUT ketchup has a real strong sour odor after a while and an average garbage bag is the size of a small child. 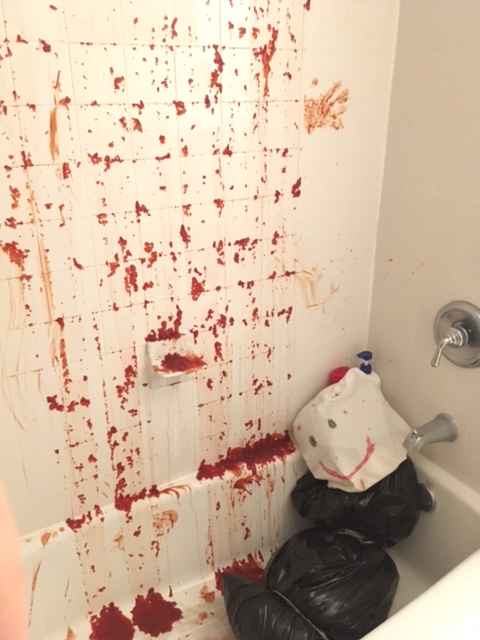 So my the ketchup just slid off the wall and dried in weird chunks and my scary hood on the body didn’t come off as creepy. It was the one part of the party I felt was a fail…..

What can I say….I tried.

The best part was spending time with friends and everyone dressed up!!! 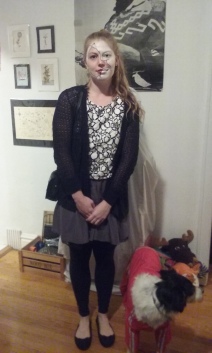 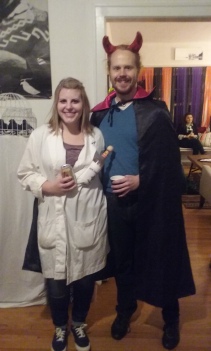 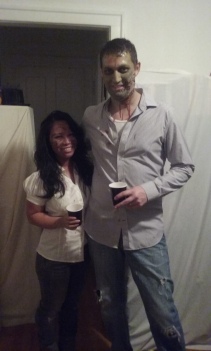 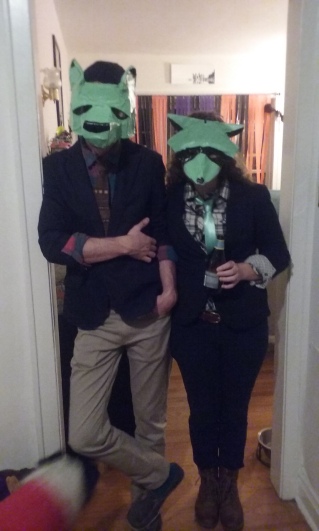 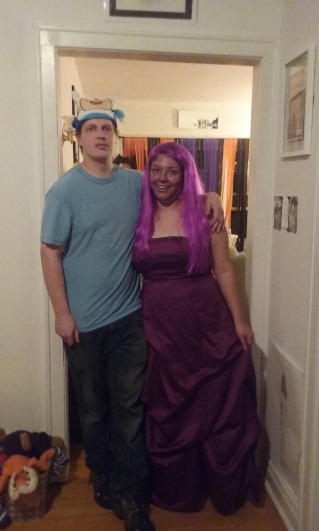 It was an all in all good time!
Keep these ideas in mind for your Halloween bash next year, white sheets, crepe streamers, and dollar store finds can go a long way! And never be afraid to ask family and friends if you could borrow some freaky decor pieces they might own (just for the day). 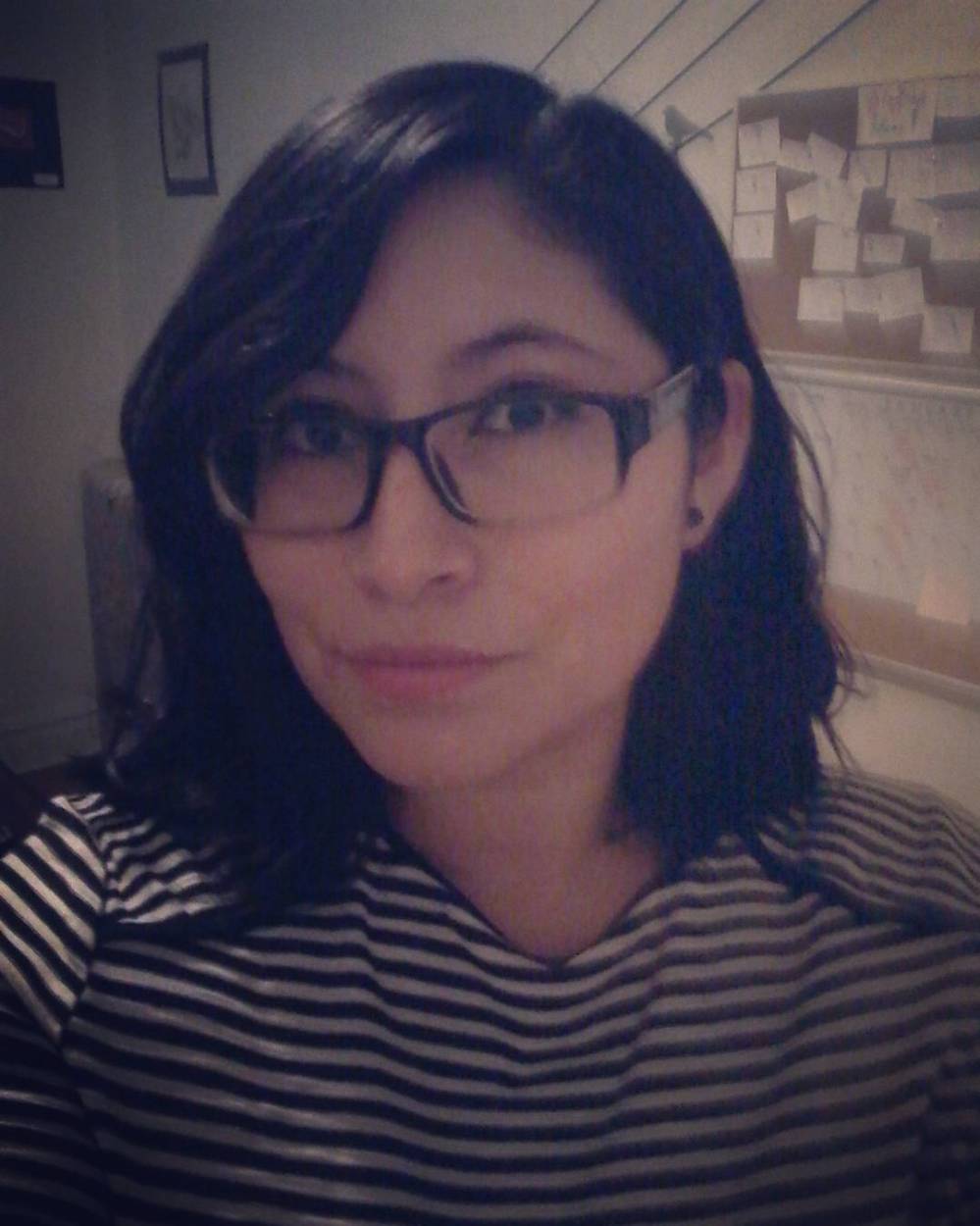